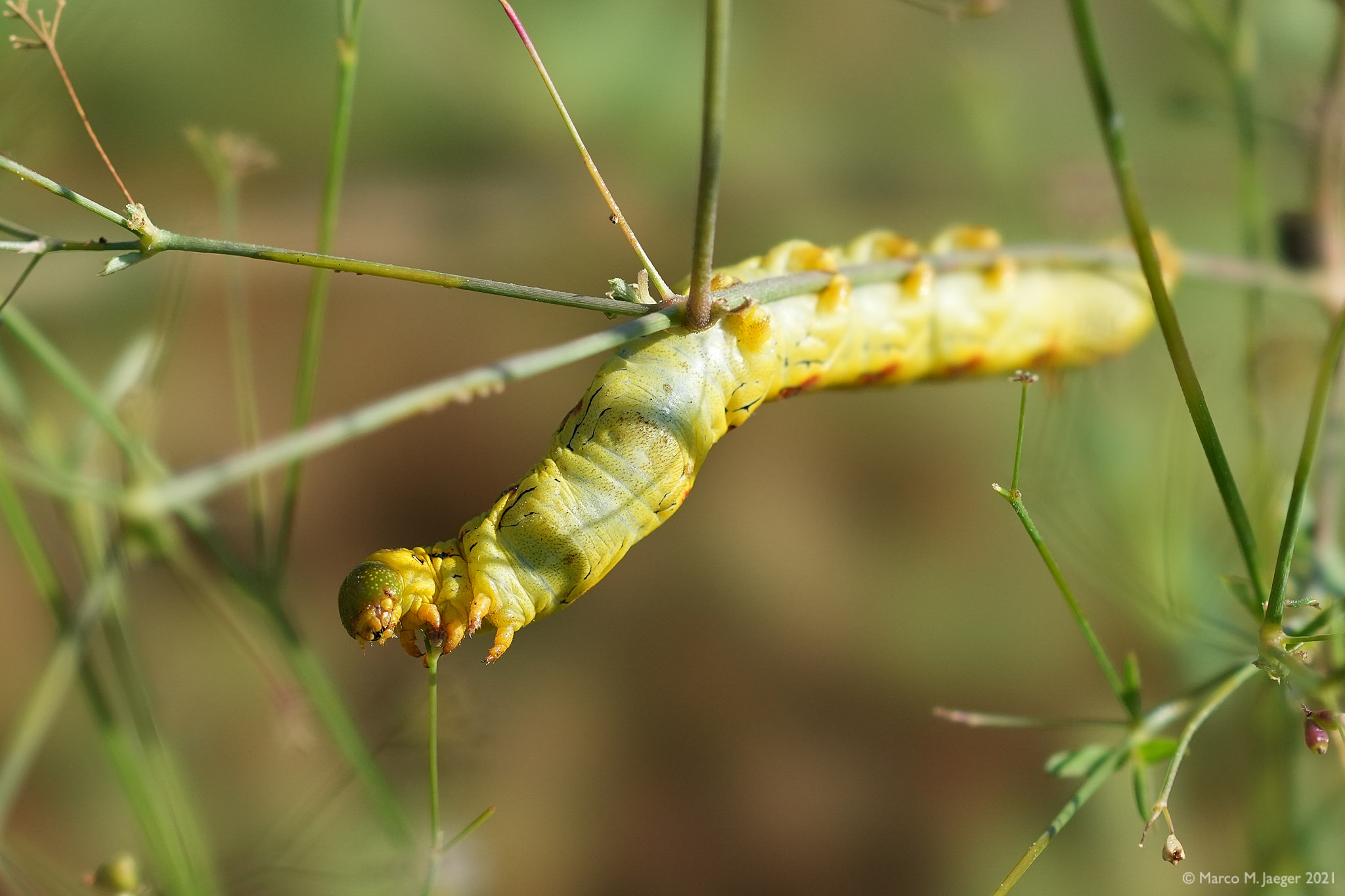 This year’s monsoon in Arizona has been wonderful for plants and critters. The great plant growth allowed for successful reproduction and survivorship of white-lined Sphinx moths (family Sphingidae) also called hawk moth or hummingbird moth because of its hovering, swift flight patterns. In some places there were millions of caterpillars if not more. It was difficult to walk without stepping on one and the highways were littered with larvae dead and alive. They can be found throughout all the North American desert regions in many diverse habitats, especially after rains, and they feed on most desert plants.

White-lined sphinx moths are among the largest flying insects of the deserts, with adult wingspans exceeding 5 inches. Larvae can be just as long, up to 5 inches, with most having a prominent horn at the rear of their fleshy body. When alarmed, these caterpillars rear up their heads in a threatening sphinx-like posture.

The body of the white-lined sphinx moth ranges in length from 2 1/2 to 3 1/2 inches. It has a prominent brown head, a brown thorax with 6 white stripes and a brown abdomen with paired dark spots on each segment. The forewings are brown with a buff-colored band from base to tip and veins outlined in white. The hind wings are pink, turning to dark brown near the edges.

Most people only see the larvae, commonly known as the white sphinx caterpillar or the hornworm. The caterpillars feed on desert wildflowers in the spring and/or summer. They are eating machines and can wipe out whole fields of wildflowers. The Swainson’s hawks feed on these same larvae as flocks migrate through the desert as we have seen at the Santa Cruz Flats earlier this year. Some years, millions of the larvae are feeding on the plants, and desert roads like N Bush Hwy last week, are covered with caterpillars crushed by cars – I had to give our car a thorough wash but the strong smell in our garage is still lingering around.

On my numerous hikes last and this week I discovered that sphinx moth larvae migrate underground to metamorphose into adult moths, who then dig their way to the surface. Mating occurs shortly thereafter, with females laying as many as 1,000 eggs on the underside of food plants. Eggs hatch within a few days. In the Sonoran and Chihuahuan deserts, there may be two broods, one in the spring and another in summer. Males and females die after they have completed their roles in the reproductive process.

Sphinx moths emerge at dusk from their hiding places and begin feeding on the nectar of flowers. Their rapid wing beats, allows them to hover and feed in the manner of hummingbirds, for which they are sometimes mistaken. The last couple weeks we have seen them going after the blooming Arizona puppies and some other flowers, they are considered very important pollinators.

The way they fly requires a lot of energy and creates a good deal of heat in the moth’s body. For these reasons, moths feed exclusively on nectar and seek flowers which produce large amounts of water that also contain high amounts of sugar.