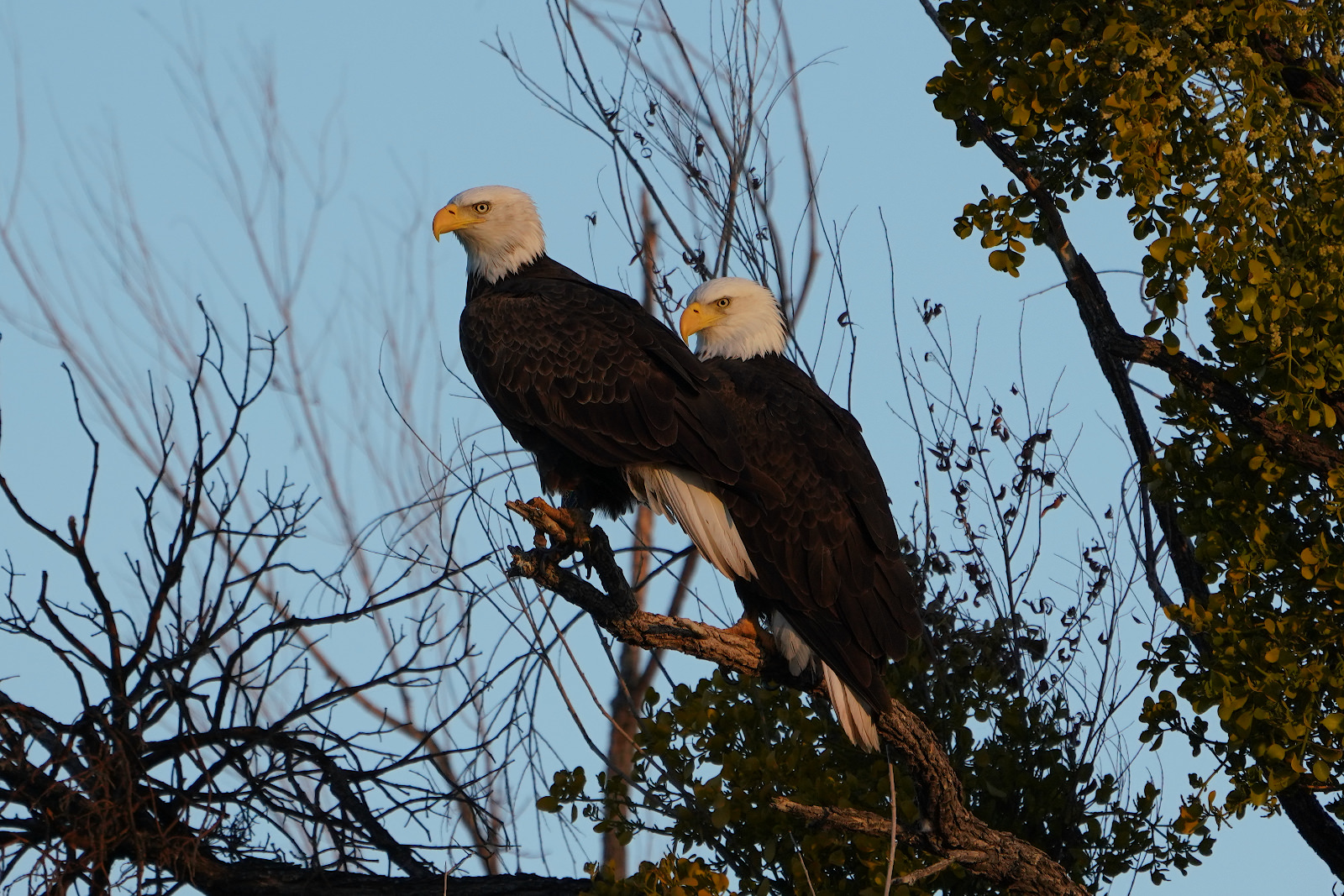 Another reason for regularly visiting the Salt River area besides meeting like minded people and observing the Wild Horses are the majestic Bald Eagles – the sheer size of these birds is fascinating and they are just beautiful – I have been watching them for hours and hours. One day I was lucky to take a few shots when they were mating – 10 seconds and the fun was already over – on some other day the eagle came down to the river to drink and still another day it picked up a branch in the river bed for their nest. We have seen them carrying around branches as early as September. One morning we have seen two couples just a few hundred yards apart from each other and once in a while we have also been lucky to see a juvenile which is still all brown.

Most famously known for being the United States of America’s national bird, the bald eagle is highly recognizable with its white head and tail and brown body. The bald eagle has an average wingspan upwards of eighty inches (~2 meters). Female eagles are larger than their male counterparts, but otherwise, both look alike and sport the same hooked yellow beak and yellow eyes.

In the late 20th century it was on the brink of extirpation in the contiguous United States. Populations have since recovered and the species was removed from the U.S. government’s list of endangered species on July 12, 1995 and transferred to the list of threatened species. It was removed from the List of Endangered and Threatened Wildlife in the Lower 48 States on June 28, 2007 – the bald eagle now thrives throughout Arizona and the country.

Since their major diet is fish, bald eagles are primarily found near large bodies of water. Arizona bald eagles place their nests within a mile of a creek, lake, or river, however there are rare exceptions. Nests are placed mostly on cliff edges, rock pinnacles, and in cottonwood trees, however, artificial structures, junipers, pinyon pines, sycamores, willows, ponderosa pines, and snags of these trees also have housed eagle nests.

Bald eagle breeding areas vary in size depending on the resources available and proximity of other breeding areas. Territory size, nest location, and resources are affected by availability of nest sites, the water system and diversity and abundance of food. Breeding areas on the regulated lower Verde River are the densest in the state with eight breeding areas downstream of Bartlett Dam above the Salt River confluence.

During the winter, bald eagles migrating to Arizona from the north are found in a variety of habitats throughout the state. The wintering bald eagles will follow the freeze line south to find more available prey. Large numbers are common at lakes and rivers along the Mogollon Rim area and east throughout the Arizona White Mountains. Bald eagles are not regularly found in large concentrations, but occasionally 30 or more bald eagles are present around Mormon Lake as well as Upper and Lower Lake Mary in the Flagstaff area. About 300 bald eagles migrate to Arizona in the winter each year.

Bald eagles mature and become sexually viable by age five and sometimes as early as age four. Scientists have determined that bald eagle pairs mate for life after a courtship filled with calls and flying displays. Unlike their northern relatives, Arizona bald eagles typically breed earlier in January and February. Female eagles will lay between one and three eggs per year. Both male and female incubate the eggs at turns. Hatching occurs after a thirty-five day incubation period. The fledgling period may last as long as ninety days.

Typically, about 45 days after leaving the nest, the young migrate to Canada and the Northwest states. Two and three year old bald eagles also migrate annually to these destinations.