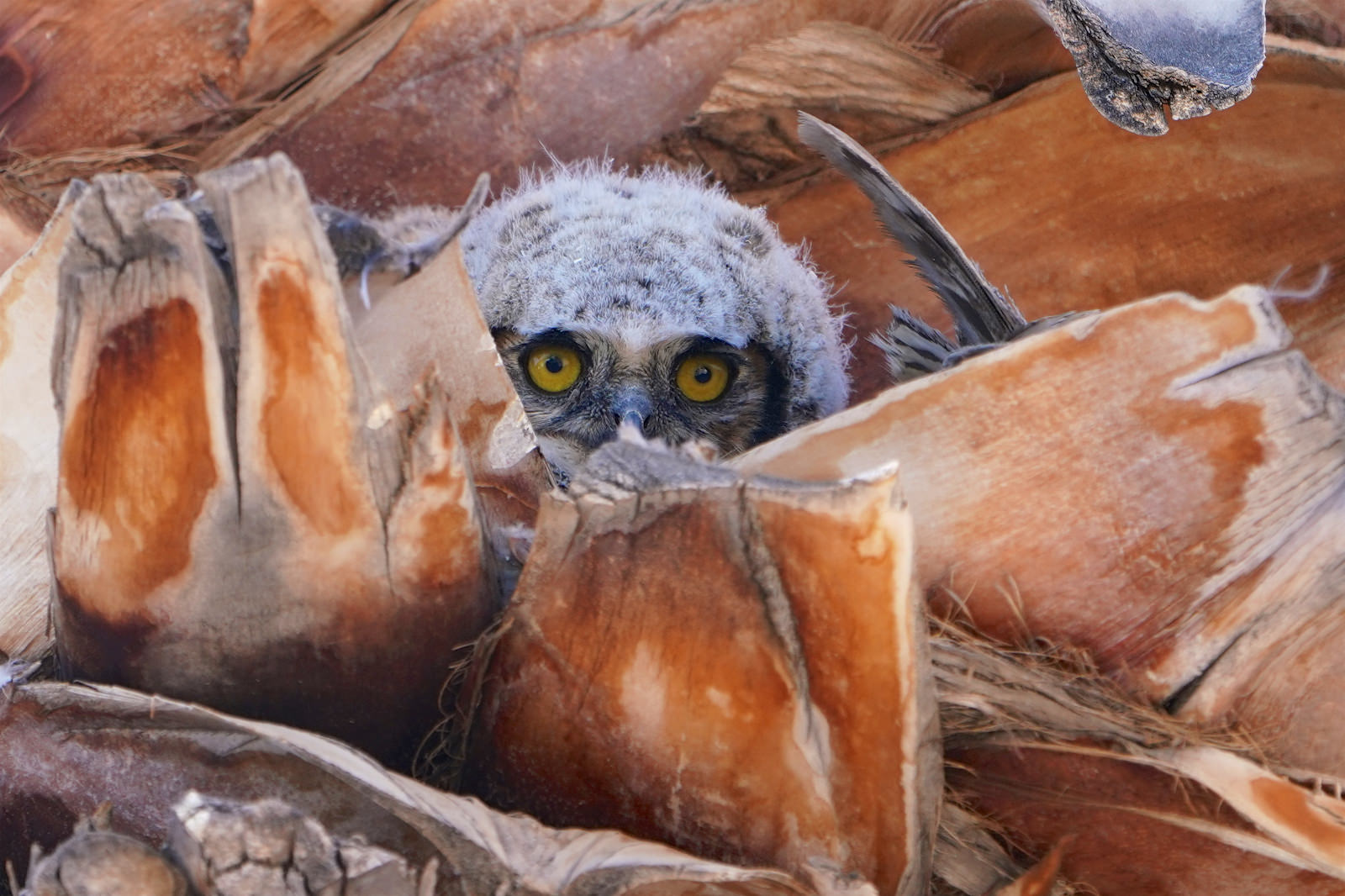 On my numerous visits to the Salt River I recently got a hint from Dick and Rick, two snowbirds currently residing at an RV/Mobile Home Park in Mesa, that there is a “Great Horned Owl” at some neighboring community – a park with approx. 2,400 mobile homes. Dick has been spending the last 17 winters in Mesa in order to escape the rough winters in the New York area.

I went to check on the owls last Friday for the first time late morning – the light was rather harsh already so Jackie and I decided to go again late afternoon the very same day.

We watched the mom with her two fluffy chicks sitting on a big palm tree. They both were very curious and interested in what was going on below them, every bike, golf cart, or dog walking by was observed. We were told by a resident that they are about 3 weeks old and that last year the owl was there too but in a different palm tree.

We are sure that we will visit these lovely guys again soon before they leave the nest and take off.

Last year late spring and into summer we frequently saw a Great Horned Owl and her two chicks in the large cotton wood trees at the Desert Botanical Garden. The chicks were already older and able to fly though and we never saw them that close.

The great horned owl (Bubo virginianus) is a large owl native to the Americas. It is an extremely adaptable bird with a vast range and is the most widely distributed true owl in the Americas. Its primary diet is rabbits and hares, rats and mice and voles, although it freely hunts any animal it can overtake, including rodents and other small mammals, larger mid-sized mammals, birds, reptiles, amphibians, and invertebrates.

In ornithological study, the great horned owl is often compared to the Eurasian eagle-owl.

The great horned owl is among the world’s most adaptable owls or even bird species in terms of habitat. The great horned owl can take up residence in trees that border all manner of deciduous, coniferous, and mixed forests, tropical rainforests, pampas, prairie, mountainous areas, deserts, subarctic tundra, rocky coasts, mangrove swamp forests, and some urban areas. In the Mojave and Sonora Deserts, they are absent from the heart of the deserts and are only found on the vegetated or rocky fringes. In prairies, grasslands and deserts, they can successfully live year around as long as there are rocky canyon, steep gullies and/or wooded coulees with shade-giving trees to provide them shelter and nesting sites.

This species can occasionally be found in urban or suburban areas. All mated great horned owls are permanent residents of their territories, but unmated and younger birds move freely in search of company and a territory, and leave regions with little food in winter.
Wikipedia