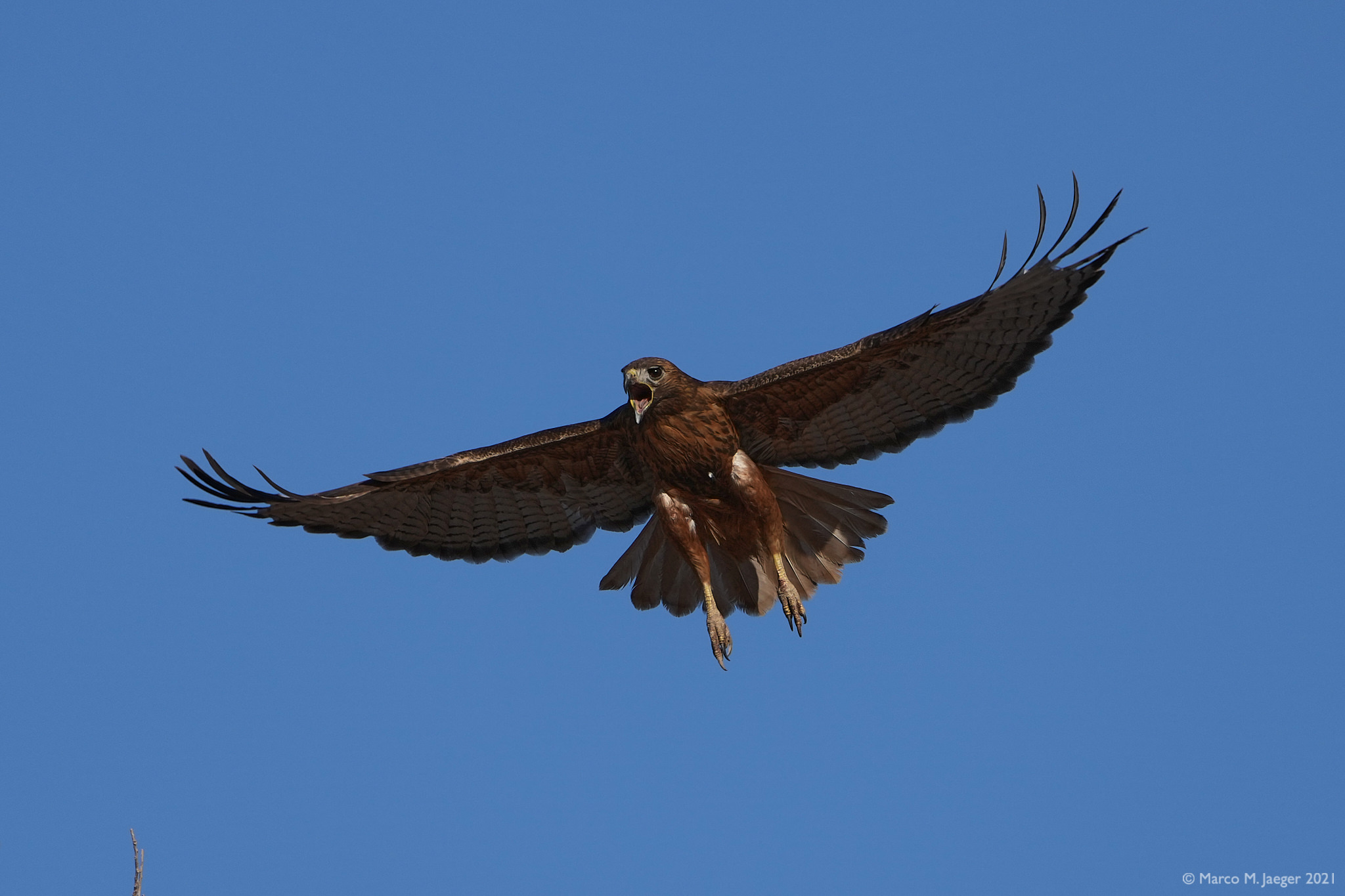 Last Saturday and Sunday we drove South to the Santa Cruz Flats to shoot some birds – one reason to drive to the Flats always is the Caracaras that can be found there – another reason is that we discovered some great horned owl and red-tailed hawk nests a few weeks ago – last but not least a friend of ours told us that they have seen many Swainson’s hawks in the area.

As you can tell from looking at the pictures below we were not disappointed – we saw two great horned owl nests with chicks – the chicks are rather light colored compared to the baby owls we have seen in our region. We got some nice shots of the red-tailed hawks as well. In addition we saw white-faced ibis in their most beautiful plumage as well as some long-billed curlews looking for a snack in the flooded fields.

In regards to the Swainson hawks I estimate we saw about a 100+ of those raptors – they were sitting on trees, sometimes two or three at the time on the same tree and they were sitting in the fields – beautiful birds with some color variations.

Swainson’s hawk (Buteo swainsoni) is a large bird species in the Accipitriformes order. This species was named after William Swainson, a British naturalist. It is colloquially known as the grasshopper hawk or locust hawk, as it is very fond of Acrididae (locusts and grasshoppers) and will voraciously eat these insects whenever they are available. Their breeding habitat is prairie and dry grasslands in western North America. They build a stick nest in a tree or shrub or on a cliff edge. This species is a long-distance migrant, wintering in Argentina; it has been recorded as a vagrant in neighboring Chile, in the island countries of the Dominican Republic, and Trinidad and Tobago, and in Norway. This species or its immediate predecessor is the ancestor of the Galápagos hawk, as demonstrated by recent research. Then later diverged from the mainland birds perhaps 300,000 years ago, a very short time in evolution.

There are two main color variations. Over 90% of individuals are light-morph; the dark morph is most common in the far west of the range:

Swainson’s hawk inhabits North America mainly in the spring and summer, and winters in South America. Breeding areas include south-central Alberta, central Saskatchewan, southwestern Manitoba, and west and southern Minnesota. They will breed as far north as east-central Alaska, and southwestern Yukon. Breeding continues south through the eastern parts of Washington and Oregon, locally to the central valley of California, Arizona, New Mexico, Colorado, and most of Texas. The eastern part of its range includes Minnesota, northwestern Iowa, most of Nebraska, Kansas, and Oklahoma, and all but eastern Texas. It periodically occurs in Iowa and rarely in northwestern Missouri, northern Illinois, and southwestern Wisconsin.

Small populations winter in southeastern Florida and along the Texas coast, probably having failed to find the way south around the Gulf of Mexico. Swainson’s hawks mostly winter on the pampas of South America in Argentina, Uruguay, and southern Brazil. The populations of Swainson’s hawks breeding in California’s Central Valley also winter in western Mexico and central America.

The Swainson’s hawk is the second longest migrant of any North American raptor, after arctic nesting Peregrine falcons. The flight from breeding ground to South American pampas in southern Brazil or Argentina can be as long as 7,100 mi (11,400 km). Each migration can last at least two months.

They leave the breeding grounds from August to October. Fall migration begins each clear day on which a wind blows in the general direction of travel. Birds gain altitude by soaring in circles on a rising thermal and then set their wings and close their tails as they glide, slowly losing altitude until they find another thermal and rise with it.

The birds gradually head southwards toward Central America where virtually the entire population funnels through the Isthmus of Panama. Concentrations over locations like Ancon Hill, Balboa, and Panama City are spectacular.

The habitat of Swainson’s hawk consists of open and semi-open country – deserts, grasslands and prairies – in both its breeding and wintering ranges. It favors wild prairie, hayfields, and pastures over wheat fields and alfalfa fields, which may offer its prey too much cover. It requires elevated perches for hunting and a supply of small mammals such as young ground squirrels as prey for its nestlings. The breeding distribution of Swainson’s hawk is tied very closely to the distribution of various small mammals for this reason. In Saskatchewan, for example, the distribution of Richardson’s ground squirrel and Swainson’s hawk are precisely the same.

Swainson’s hawk will defend its breeding territory from other buteos. Breeding densities may vary from one area to the next but averages one pair per 2.5 sq mi (6.5 km2). The average home range estimate for this hawk is 1 to 2 sq mi (2.6 to 5.2 km2). It gathers in groups for feeding and migrating. However, in each case, such gathering is not social, but motivated by good feeding or migrating conditions.

Swainson’s hawk, the red-tailed hawk (B. jamaicensis) and the ferruginous hawk (B. regalis) compete for territory, and defend territories against each other. In many parts of the plains these three species nest in the same general area and exploit much the same prey base. Although diets overlap greatly, habitats may not overlap as much. In Oregon, Swainson’s hawk selects nesting trees having a different configuration than those used by red-tailed or ferruginous hawks. In southern Alberta, different nesting habitats help reduce food competition, with Swainson’s hawk favoring areas with scattered trees or riparian borders, while red-tailed hawks nest in stands of tall trees, and ferruginous hawks nest on the open plains.

In winter quarters, they are far more tolerant, though many birds will still fend for themselves. In Uruguay, the species likes largely open but broken (with rocks or woods) plains or low hills, where it can be seen to gather in larger groups. Groups of a few dozen birds are not uncommon.

Swainson’s hawks hunt using various methods. Many still-hunt, watching for prey activity from a perch such as a tree, bush, pylon, telephone pole, hummock or other high object. Others hunt by soaring over open ground with wings held in a dihedral, using their stellar vision to watch for prey activity below. It occasionally courses low over the ground like a northern harrier (Circus cyaneus) or hovers like a rough-legged hawk (B. lagopus) while hunting. They frequently engage in transect-glides while actively hunting in flight. It commonly perches on the ground both during migration and on the breeding grounds. While hunting on the ground, almost entirely for large insects, their gait can appear awkward but they are often successful in pinning down several insects per day. During migration, it typically roosts for the night on bare ground with scattered trees, a habit that distinguishes it from fellow long-distance migrants such as the broad-winged hawk (B. platypterus), which roosts in closed-canopy woodlands.

These birds patrol open areas or scan for prey from a perch; they may also catch insects in flight. They take advantage of insects turned up by farm equipment or driven out by fire. A hunting Swainson’s hawk will use several strategies. It hunts insects such as dragonflies or dobsonflies while in flight, flapping little as it rides a wind current and stoops upon a fly, grabbing it with its foot and immediately transferring the prey to its bill. It uses a similar strategy to grab individual free-tailed bats from flying streams of bats. Also, when dragonfly hordes are grounded by weather, Swainson’s hawk will stand near groups sheltering from the wind and pluck at individual insects. Swainson’s hawk closely follows both tractors and wild fires for injured or fleeing food. It will also run down insect prey on the ground. Occasionally a hawk will stand still on a dirt bank or elevated mound waiting for prey to appear. It commonly hunts from elevated perches such as telephone poles, stooping on prey when it is sighted.

Swainson’s hawks may be largely insectivorous except when nesting. Insect prey commonly taken includes grasshoppers, crickets, and locusts. Other Buteo hawks in this species range, including smaller-bodied species, do not normally prefer insects in their diet but instead focus on rodents and other small vertebrates. However, breeding birds switch mainly to capturing vertebrate prey, which pairs then bring to their nestlings. Breeding Swainson’s hawks rely heavily upon small mammals such as young ground squirrels, young cottontails, pocket gophers, mice, young jackrabbits, and, at least locally, small birds and other vertebrates including reptiles and amphibians. Birds taken include large birds such as Mallards, and Sage Grouse which may have been injured initially.

Other unusual bird species taken include American kestrel, and young short-eared owls. More typical in size are young lark buntings taken at their fledging time. Reptiles, which can comprise large parts of a diet, include snakes such as racers, gopher snakes and striped whipsnakes, and lizards. Amphibians may include tiger salamanders and toads. Swainson’s hawk is an opportunistic feeder which responds quickly to local concentrations of food.

In Argentina, flocks of immature Swainson’s hawks feed on flocks of the migratory darner dragonfly Rhionaeschna bonariensis, following the hordes of insects and feeding mostly on the wing. Local outbreaks of locusts may also be exploited for food by one or more age-classes of birds. The immatures wintering in southern Florida apparently feed upon either insects, mice, or both, when turned up from field plowing. They move from one freshly ploughed field to the next.

There is also some evidence that road-killed birds and animals are also consumed both on the wintering grounds and on the breeding grounds. The species commonly follows tractors and other agricultural equipment during haying or ploughing, where rodents are exposed for the hawks to capture, or insects are uncovered after crop cutting. Wildfires often attract foraging Swainson’s hawks, especially grass fires in their South American wintering range. In South American grass fires, the hawks frequently wait around the edges of the fire, picking off not only insects but also vertebrates including nothuras, lizards and snakes.