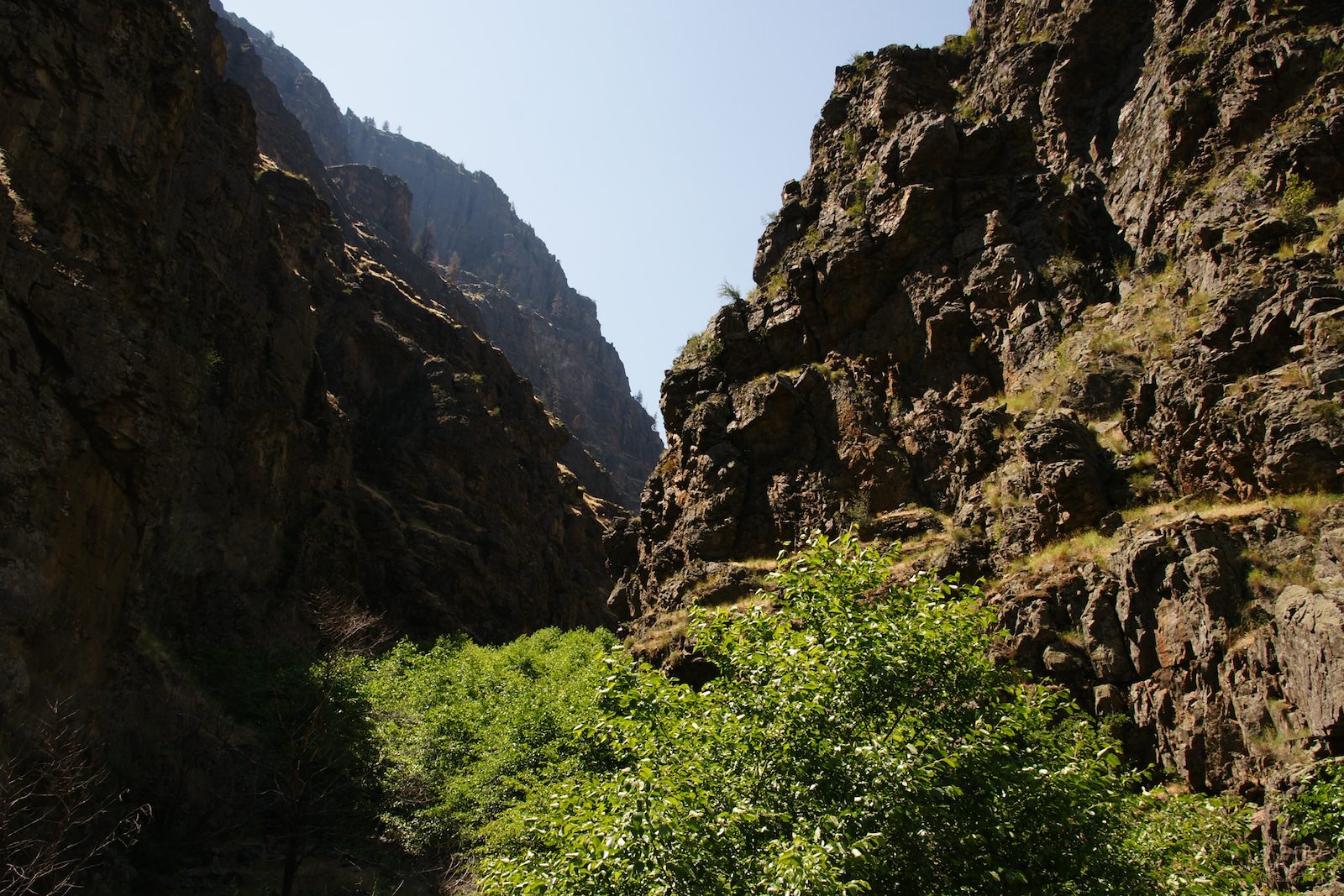 As yesterday we did not get to the Birds of Prey Park, we head there first thing in the morning. At the Visitor Center they have some cages where they have “birds in need of help”. One is a falcon that they had to raise by hand as it fell out of the nest several times and the second one we see is a Bald Eagle that had a collision with a trailer and can only fly about 50 feet at the time. The guy there hands us a map and directions to the Snake River where the actual bird of prey preserve is. Once there, we hear the birds and see some flying from far but are not lucky enough to see them or their nests in the cliffs.

We drive back and take HWY 84 north towards Hells Canyon National Recreation Area. The first part of the road leads again through Idaho farming land.  On the way we see dozens of swallowtails, they are everywhere – amazing, we have never seen so many. Then we get to the Snake River, we pass two dams and drive along the river back into Hells Canyon until the road ends after about 25 miles. From there only boats get further into the canyon. The mountains to the left and right are quite green (compared to what we are used to from the canyons in Utah and Arizona), the temperature is very nice and the sun is shining – a beautiful experience and a magnificent view! Back at Homestead, where the actual canyon starts, we turn right and take the road to Baker City. It’s an about 70 mile drive through Oregon country side: a curvy road through green hills and meadows, the sunroof open and some great tunes from Billy Ocean, Beatles, Elvis, Michael Jackson (whom we specifically honor after his death yesterday) and many more – wonderful!

In Baker City we quickly find a functional room and then walk a couple blocks to the historic old town. Baker City, known as the “Queen City of the Mines”, is a community steeped with tradition and history. Granted its city charter in 1870, Baker City was once considered to be the premier social center along the Oregon Trail and once boasted the largest population of any city in the state of Oregon. During an era when gold mining was the norm, Baker City was born as a support center for the surrounding gold mining towns. Baker City soon became the focal point of activity. These days, Baker City has quieted down a bit. Gone are the bawdy houses and dancing girls, the wild saloons and even wilder people. One thing that hasn’t changed, however, is the community’s commitment to its past and future. Today, Baker City is rich with the flavor of the 1890s with its nationally recognized historic shopping district, museums and attractions.

One of the the historical buildings is the Geiser Grand Hotel. It was built in 1889 during the gold mining boom. It enjoyed the reputation of being the finest hotel between Salt Lake City and Seattle. Those who visited and settled in Baker City enjoyed the finer things in life. Timber and cattle barons, politicians and dreamers mingled here. Fresh Maine Lobster and Green Turtle Soup were among the delicacies served by white gloved waiters. The Geiser boasted the third elevator west of the Mississippi. The first was the Hotel Jerome in Aspen, the second the Hotel Del Coronado in San Diego. The Geiser was one of the first hotels in Oregon to offer electricity, a marvel in its time. When the “good times” were over the hotel closed down in 1968 and was almost demolished to become a parking lot. From 1993 to 1998 the building was restored. The restoration was privately funded and cost about 7 million dollar.

Believe it or not: we have dinner at this very nice and nobel place. We sit there in shorts and tennis shoes and enjoy the early bird special for $7.99 each (a regular entree costs at least twice as much). It is delicious and very stylish – another highlight of the day!