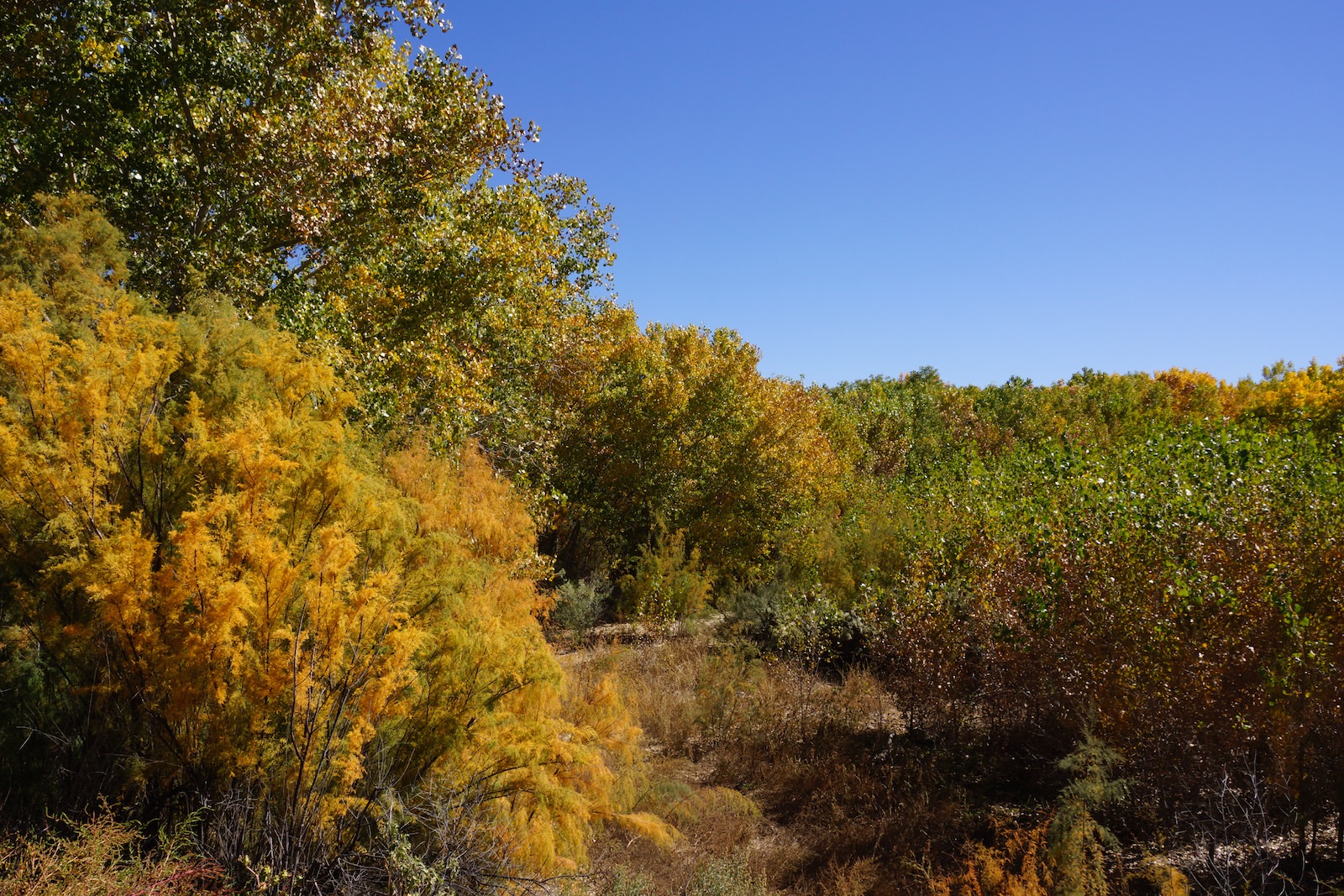 We convinced David to join the kids and us on a day trip to the Bosque del Apache National Wildlife Refuge, which opened again on Thursday, after the government shutdown. Established in 1939 to provide a critical stopover for migrating waterfowl, the refuge is well known for the thousands of sandhill cranes, geese and other waterfowl that winter here each year.

Marco read on the internet that now would be a good time to see a lot of migratory birds that are on their way to warmer areas.

After a bit more than 2 hours driving we arrive at the park and first stop at the Visitor Center to learn more about where to go and what to expect. Then we head on to the south loop. We see snow geese, cranes, lots of different ducks and some other water birds. There are a lot of cottonwood trees which currently look very pretty with their golden leaves. In parts of the park they are growing corn so the birds have some nourishing food on their long way, other parts are getting flooded in September to accomodate for the water birds.
We also see a deer and some birds of prey and we find tracks of raccoons – and, a whole lot of mosquitos!

Monique even completes the junior ranger program and, at the end of the tour, gets a badge and the signature of an official park ranger – congratulations!

An interesting and fun day. Thank you, Elina, for taking over David’s morning duties!

This band was worn for 36 and a half years by a Rocky Mountain sandhill crane (RMSH). It is one of the oldest RMSHs known and the band it wore had limited wear for all that time in the wild. The bird was banded with its brood mate (a two-chick brood) on 29 June 1973, one mile north of Border, WY, on the Thomas Fork of the Bear River.

The brood was apparently chased and caught approximately 150 yards east of the Idaho border in Lincoln County, WY. The bird was between 41-44 days old. In addition to the band, it was marked with a neck collar, which it apparently lost sometime after August 1981, the date of its last sighting in Idaho. The bird was also observed in April 1981 in the San Luis Valley.

The distance “as the crow flies” from Border, WY, to a staging in the San Luis Valley of Colorado and then down the Rio Grande to Bosque del Apache is approximately 700 miles. If you assume this crane returned close to its nesting grounds each spring and back to Bosque del Apache each winter, the band made the round trip 36 times, as well a final one-way trip where it was recovered. That is a total of 51,100 miles in a lifetime, or the equivalent of circling the earth more than twice.
Source: Bosque del Apache National Wildlife Refuge