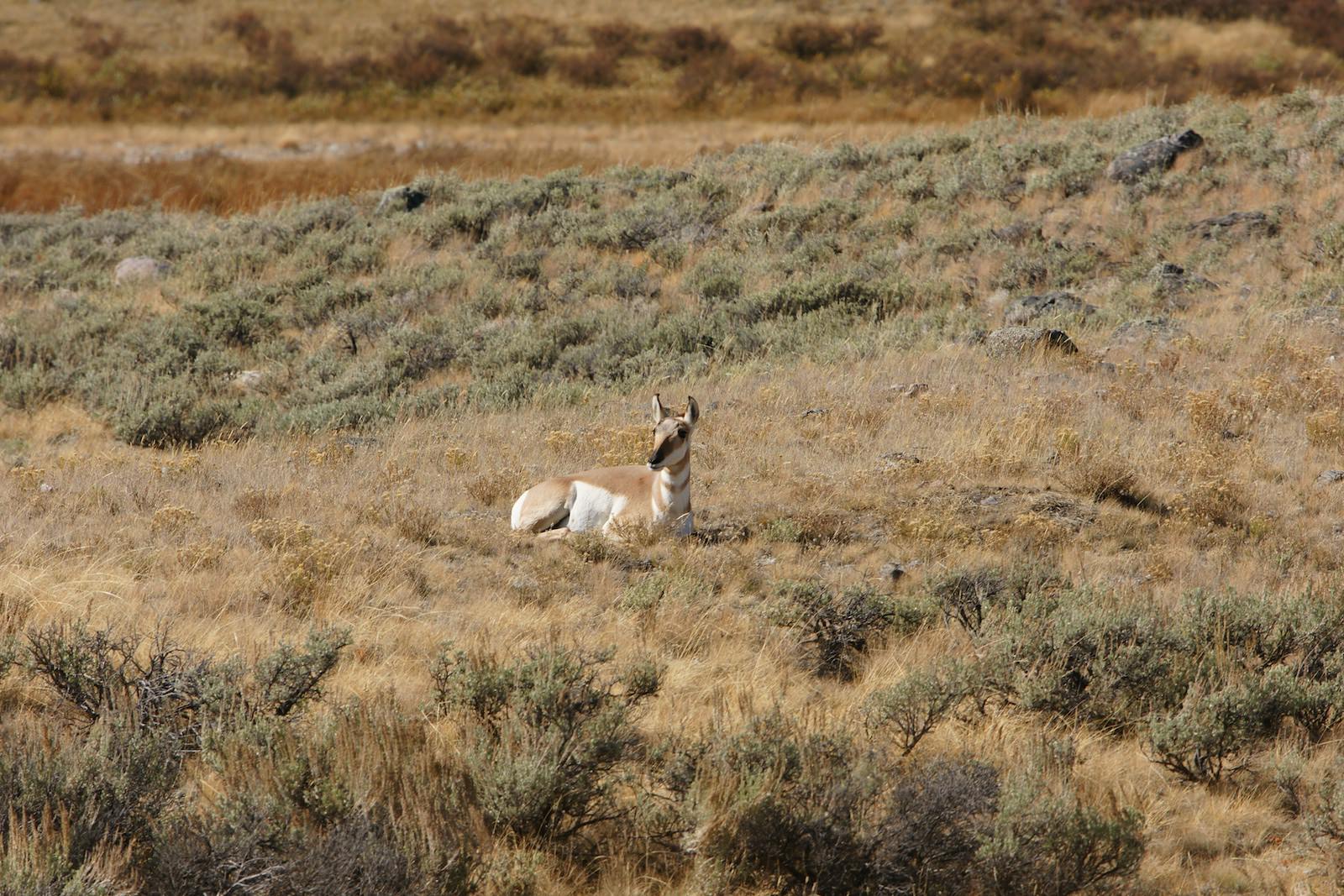 It’s our last day up here and we definitely want to spend it in the Park, there are some corners and routes that we want to do again or have not seen yet.

Our first stop is at the Gibbon Falls, until now we were always too early for them to be in the sun already, today we are a bit later and part of the falls is already lit by sunlight.

Our second point of interest is Mount Washburn. The view from up here (at an elevation of over 8,700 feet / 2,650 Meter) is absolutely breathtaking: mountains, forests and meadows all the way to the horizon. It makes us realize once more how big Yellowstone is and how easy it is for all the animals to stay away from the streets and the people.

Then we are heading further up north and do the Blacktail Plateau Drive again, which we did on our first day, but with a different lens. This time Marco wants to take some close-ups. We spend some time in a small patch of forest and watch squirrels and chipmunks besides enjoying a typical warm and sunny fall day, watching the colored leaves blowing in the wind and falling to the ground. By next week the whole glory might be over and winter may kick in.

Shortly after we are back on the main road we see two Antelopes lying in the grass. We park the car at the next pullout and walk back to take some amazing pictures of them. They watch us the whole time and finally one gets up and then the other and they run away. We follow them and find them hiding behind the hill – they are watching out for us and then from one moment to the next they disappear.

Early afternoon in Mammoth Hot Springs we get a coffee and then drive back towards Norris again. At Sheepeater Cliff we turn left and take a walk along the Gardner River and the cliff. The cliff was named after the Shoshone Indians who lived throughout this mountainous region. Their use of bighorn sheep earned them the name “Tukadika” or “Sheepeater”. The cliff is basalt lava that formed columnar joints when it cooled nearly 500,000 years ago.

Then we are entering “moose country”, we stop twice to watch out for one. The area has lots of creeks, marshland and shrubs where they can hide – this is what moose like. They never go far away from coverage and they are mostly solitary, besides mothers with their calf they are mostly by themselves. As hard as we try and look through the binoculars their is no moose in sight.

We take our time and stop at Beaver Lake, which is beautifully lit by the late afternoon sun, before we are heading back towards West Yellowstone. The time is just right to stop again at the Riverside Drive, where we were yesterday already, to take some picture of the sun setting behind the trees.

Another amazingly beautiful day in Yellowstone ends. The last four days were indescribably breathtaking. Even though we were here at the almost exact same time last year, this year was even better, the colors were more brilliant, the geysers more active and the whole experience unparalleled (words can not describe it, only the pictures might do it justice). Tomorrow we are leaving “Yellowstone, but we will be back!”