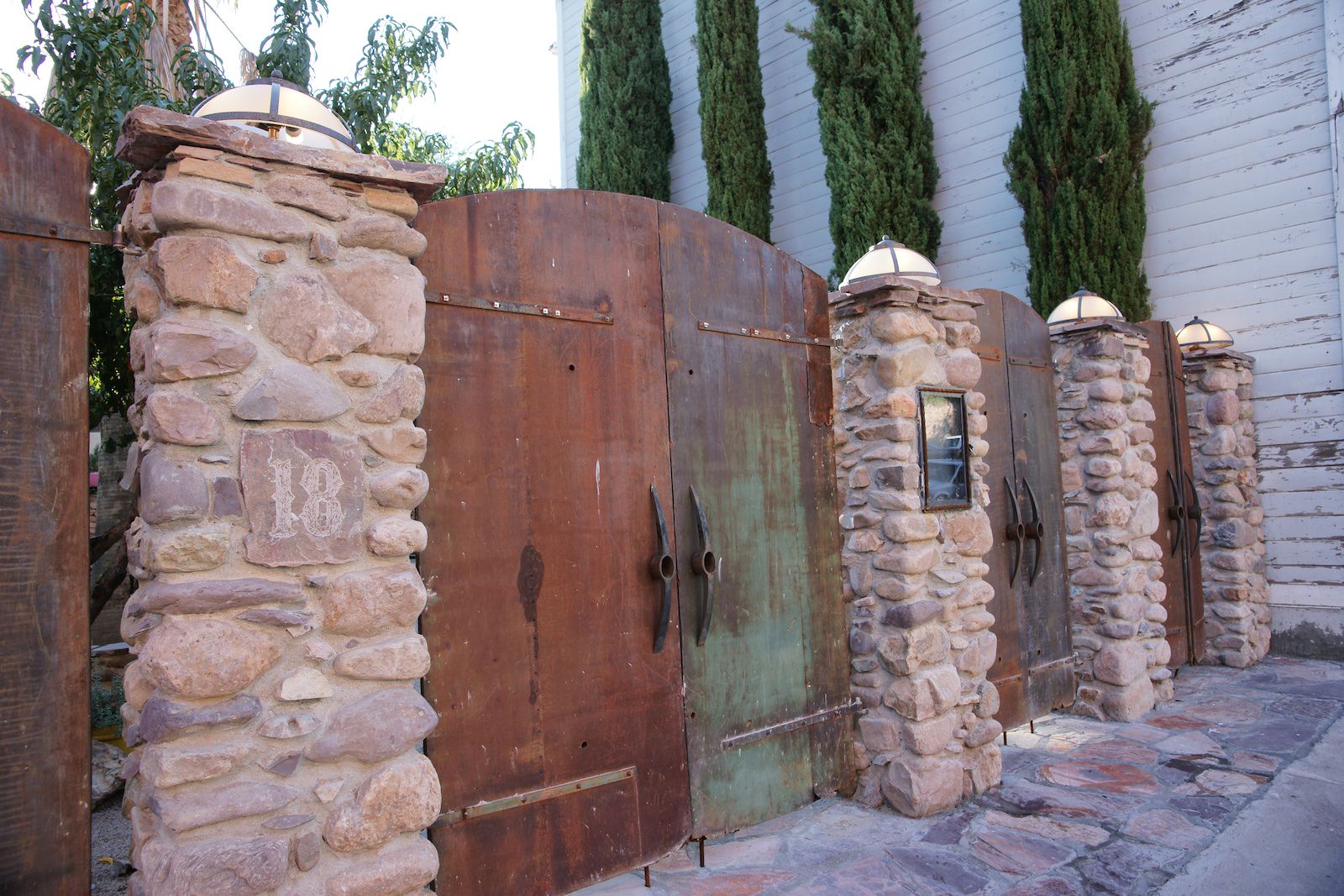 It’s time for us to leave Las Cruces and the Americas Best Value Inn. After breakfast we sadly say goodbye to Elina, David and the kids. We had a really good time there and enjoyed our stay a lot.

We take HWY 10 to Deming, there we leave the HWY and take NM11 South towards the Mexican border. Once we are out of Deming we hardly see any cars anymore, occasionally we see vehicles from the Border Patrol and at some point we meet a farmers couple who checks on their cows, but otherwise we are by ourselves and enjoy the scenery. It is mostly desert shrubs sometimes there is more grass and sometimes there is less, towards Mexico we pass some hills but in general it’s flat. We stay on NM9 from Columbus to the “border” between Arizona and New Mexico, from there its HWY 80 South for a few miles until we see the sign towards Portal.

In Portal we stop at a small Lodge with Store. We get a nice refreshing iced latte and then continue up into the mountains. To our surprise and disappointment though the road is closed after about 10 miles due to an earlier fire and some road damage from recent rains. That means we cannot drive all the way to the Chiricahua National Monument but have to turn around and then South again on HWY 80. Too bad, because we remember these mountains and the Chiricahua National Monument well from our trip back in 2003 – we had seen a black bear up there!

Well then we take the second gravel road our map shows as passing over the mountains. The area is much flatter though but it is still amazing. The big “shock” is when we arrive at Douglas, the next bigger town. It’s supposed to have a population of about 13,000 but to us it rather appears to be ghost town. We need gas but as soon as we have filled up our car we get out of that town again.

The next town is Bisbee:

Bisbee, 90 miles southeast of Tucson, is the picturesque county seat of historic Cochise County. The community was founded in 1880 and named after Judge DeWitt Bisbee, a financial backer of the Copper Queen Mine.
This Old West mining camp proved to be one of the richest mineral sites in the world, producing nearly three million ounces of gold and more than eight billion pounds of copper, not to mention the silver, lead and zinc that came from these rich Mule Mountains. By the early 1900s, the Bisbee community was the largest city in the southwest between St. Louis and San Francisco.
It had a population of 20,000 people and had become the most cultured city in the Southwest. Despite its culture, however, the rough edges of the mining camps could be found in notorious Brewery Gulch, with its saloons and shady ladies. In 1908 a fire ravaged most of Bisbee’s commercial district along Main Street,leaving nothing but a pile of ashes.

Reconstruction began immediately and by 1910 most of the district had been rebuilt and remains completely intact today. Activities began to slow as the mines played out and the population began to shrink; mining operations on a large scale became unprofitable in 1975.

Bisbee has since evolved into an attractive artist colony and retirement community emphasizing monthly special events and tourism. Travelers from all over the world come to Bisbee to savor its unique charm … an uncommon blend of creativity, friendliness, style, romance and adventure — all wrapped in the splendor of the Old West.

We walk around town for a while in the afternoon sun. It has a lot of well preserved old buildings, and most of them are hotels. It also has a lot of stores and homes for Sale or for Rent though. At around 5:30pm we hit the road again Northwest towards Tucson.

We stay at the Quality Inn near the airport and have a quick dinner at some Chinese place not too far away.