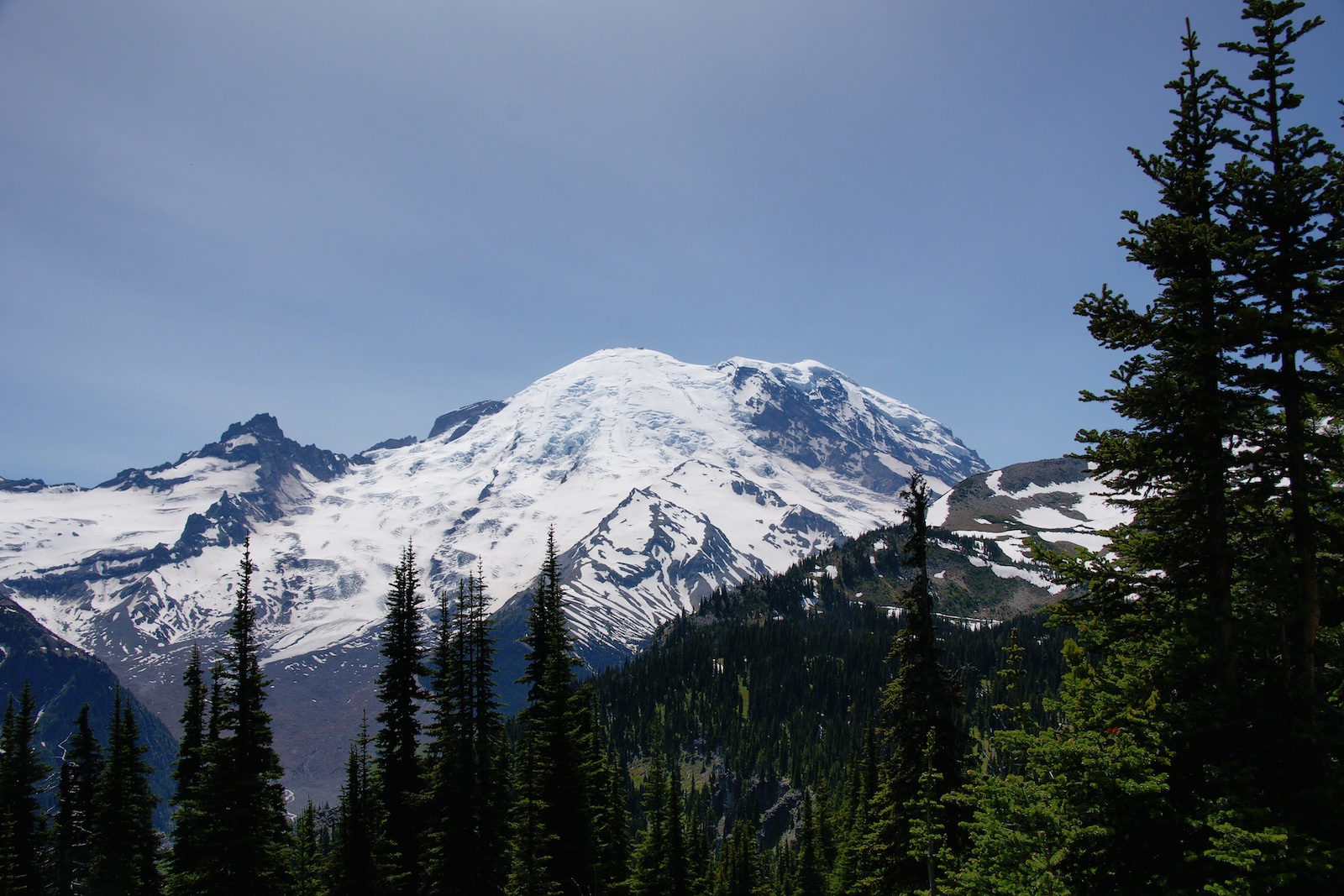 After some phone calls to Switzerland we leave the hotel late. We head south east towards Mount Rainier. It is visible from far already and the road leading there is seamed with forests to both sides. We enter the National Park at the White River Entrance and from there follow the road up the hill to Sunrise Point. There is still a lot of snow everywhere and the road has only just been opened this weekend. Spring has hardly arrived here yet. We stop at several view points along the way and take short walks away from traffic.

At Sunrise Point we park the car and take a longer walk along a trail. It is wonderfully peaceful and quiet up here. The flowers are just coming out of the ground and water can be heard everywhere. We have a fantastic view of Mount Rainier and its glaciers.

Mount Rainier is the most heavily glaciated peak in the lower 48 states. The summit is topped by two volcanic craters, each over 1,000 feet (300 m) in diameter with the larger east crater overlapping the west crater. Geothermal heat from the volcano keeps areas of both crater rims free of snow and ice, and has formed the world’s largest volcanic glacier cave network within the ice-filled craters. A small crater lake about 130 by 30 feet (40 m × 9.1 m) in size and 16 feet (5 m) deep, the highest in North America with a surface elevation of 14,203 feet (4,329 m), occupies the lowest portion of the west crater below more than 100 feet (30 m) of ice and is accessible only via the caves.

Mount Rainier has a topographic prominence of 13,210 feet (4,030 m), greater than that of K2 (13,189 feet (4,020 m)). On clear days it dominates the southeastern horizon in most of the Seattle-Tacoma-Bellevue metropolitan area to such an extent that residents sometimes refer to it simply as “the Mountain”. On days of exceptional clarity, it can also be seen from as far away as Portland, Oregon, and Victoria, British Columbia.

It actually reminds us of the alps, but its a lot bigger and wider here and not as crowded – awful and amazing!

It is completely different than Mount St. Helens. It is much greener, with lots of trees, meadows and glaciers, where as Mt. St. Helens is very bare and grayish.

On the way down and out of the park we stop at Ohanapecosh River (unfortunately the road through the Park to Paradise is still closed). This river is crystal clear shimmering green, turquoise and blue with some white water rafts. A real mountain river probably home of lots of trout and other fish!

Late afternoon we drive north again. Along the road we see an Elk lady as big as a small horse! We decide to stay in Olympia (the Capitol of Washington).

Dinner: Casa Mia (not to be recommended, though)