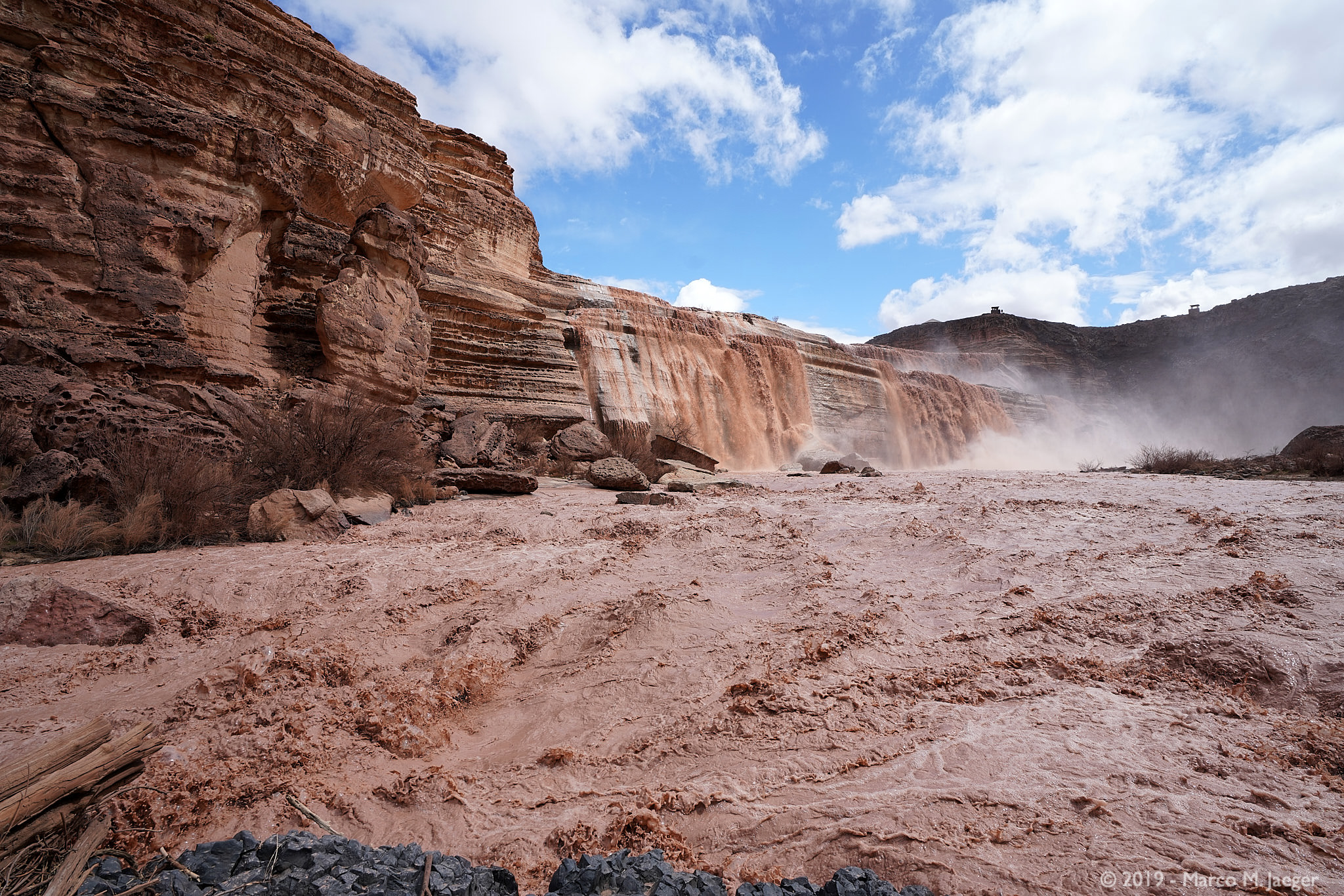 Recently a friend told us about the Chocolate Falls, which are about 1 hour north east of Flagstaff – a 3-hour drive. The official name is Grand Falls, but looking at the pictures below, it is clear why they are called Chocolate Falls. The waterfall comes to life each spring during the annual snowmelt from the slopes of the 10,064 foot (3’067 Meter) Mt. Baldy and the White Mountains in Arizona and New Mexico and for a very short time in summer during monsoon season. This year the falls are extra spectacular due to the record breaking amounts of snow that fell in the area.

The weather forecast for the coming 10 days is mixed – only for today it’s supposed to be sunny all day, so we head up north early morning. Up in Flagstaff we find temperatures below freezing (the lowest is 18 Fahrenheit, -7.8 Celsius) and snow walls along the road and even on the parking lot of the supermarket where we stop for a quick breakfast and coffee.

We arrive at the falls at around 10am and are greeted by gusty winds and nasty sprays of muddy water. Quickly the camera looks pretty messy and we have to keep cleaning the lens. Sadly the weather forecast was not really accurate, it is mostly cloudy. But we are lucky and the clouds break open from time to time and allow the sun to provide some better/different light.

Time is flying and by the time we get back to the car it is already 1:30pm, time to head back home again. Coming down to the valley again the temperatures are back to more comfortable ranges in the 60s (around 18 Celsius).

After driving us safely back home, Marco is busy cleaning all the photo equipment, while I take care of our clothes and shoes, which also got a fair share of mud from the soft grounds!

We think it was well worth the long drive!

Grand Falls is a natural waterfall system located 30 miles (48.3 kilometers) northeast of Flagstaff, Arizona in the Painted Desert on the Navajo Nation.
At 185 feet (56 meters) tall, it is taller than Niagara Falls. It dumps snow melt or monsoon rain into the Little Colorado River below. It is known for its extremely muddy flow, which is a major contributor to Little Colorado River opacity. Heavy rains or snow melt will produce spectacular viewing, photography and sound whereas the scarcity of water will produce only trickles or no flow at all.
Grand Falls was formed when lava from nearby Merriam Crater flowed into the Little Colorado River, creating a lava dam. The river was forced to reroute itself around the dam and Grand Falls formed where the river rejoins its original course.
The waterfall is remote and no major paved roads access it. In fact the closest road, Grand Falls Road, crosses the floor of the Little Colorado River and at times during the year, only a four-wheel-drive vehicle can traverse it. The falls are dormant for months of the year and reduced to only a drip.