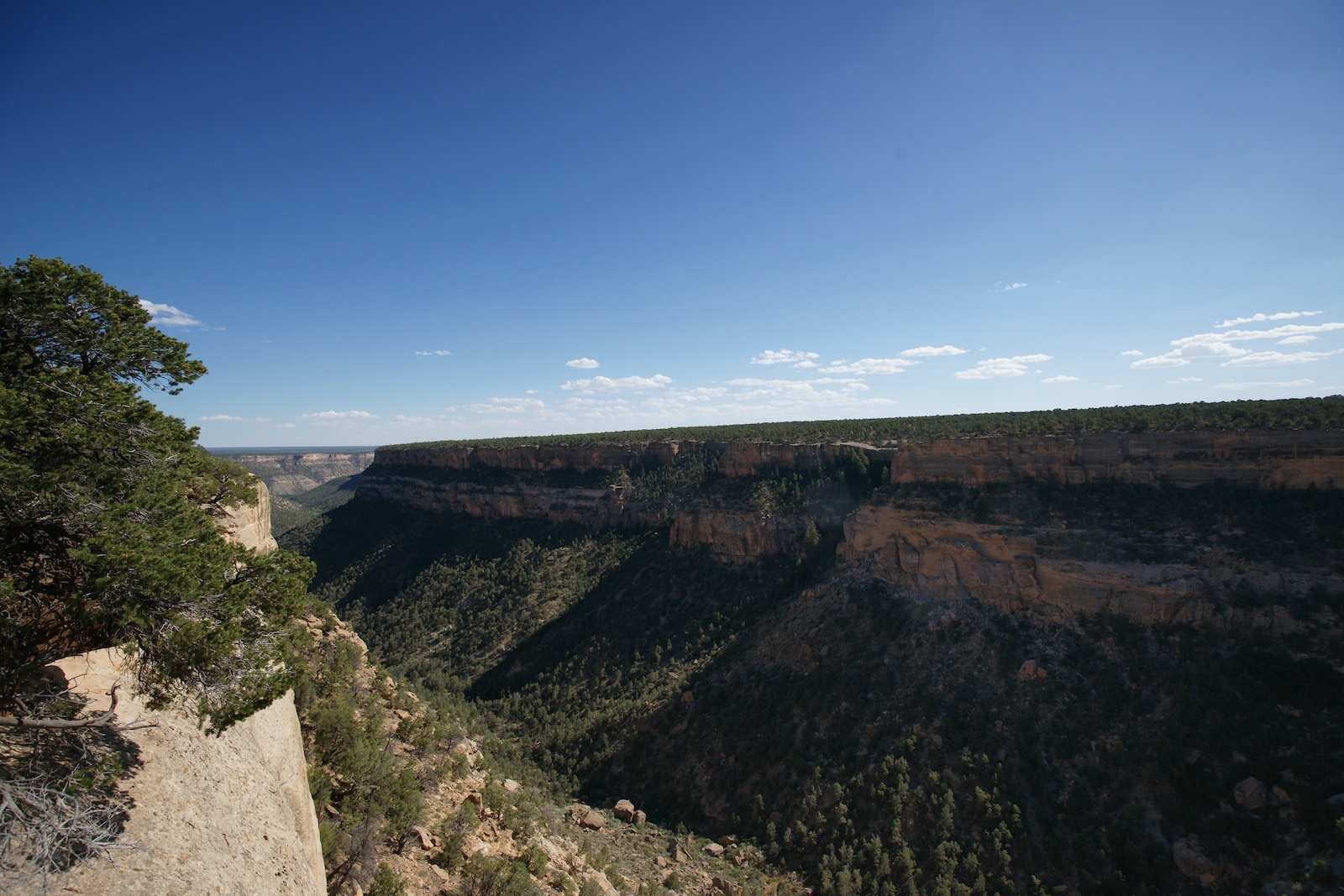 It’s Saturday, we get up early and look forward to getting out of the hotel. Quickly, while having our morning coffee, we have a look at the map and decide that Mesa Verde would be a good destination to take some nice pictures. We were there last time in 2003 and were fascinated by its natural beauty and the cliff dwellings.

Off we go, even before 7am we hit the road. We try to take the shortest road but stay away from Highways as much as possible and we are rewarded big time. Probably about 50 miles outside of Santa Fe we pass the Abiquiu Reservoir, a beautiful lake which in reality is much bigger than it looks on the map. The whole way we are at elevations between 6,800 and 7,500 feet (2,000 to 2,300 Meter), we pass small “villages” (maybe 6 or 7 houses and a church) and ask ourselves how these people can survive out here, there are no food stores, no gas stations, no restaurants (not even fast food) – there is nothing just high desert vegetation for 50 miles or more.

We pass Aztec but decide to not look a the ruins and rather have a refreshing iced coffee. A few miles further north west we pass “the border” to Colorado. Almost immediately the landscape turns greener and there is more farm land up here – it is just gorgeous!

After about 275 miles and 6 hours driving we arrive at Mesa Verde National Park.

It was created in 1906 to protect some of the best preserved cliff dwellings in the world. The park occupies 81.4 square miles (211 km2) near the Four Corners (New Mexico, Colorado, Utah, Arizona) and features numerous ruins of homes and villages built by the Ancestral Puebloan people, sometimes called the Anasazi.
The Anasazi inhabited Mesa Verde anywhere between 550 to 1300 AD. These people were mainly subsistence farmers; they grew crops on nearby mesas. Their primary crop was corn, which was also the major part of their diet. Men were also hunters which further increased their food supply. The women of the Anasazi were famous for the elegant basket weaving. Anasazi pottery is just as famous as their baskets; their artifacts, even today, are highly prized. Since the Anasazi kept no written records, their artifacts are the only link to understanding their interesting culture.
By 750 AD, the people were building mesa-top villages made of adobe. By the late 12th century they began to build the cliff dwellings for which Mesa Verde is famous.
Mesa Verde is best known for cliff dwellings, which are structures built within caves and under outcropping in cliffs — including Cliff Palace, which is thought to be the largest cliff dwelling in North America. The Spanish term Mesa Verde translates into English as “green table.” Approximately 600 of the over 4700 archeological sites found in Mesa Verde National Park are cliff dwellings.

We are wondering how many of their children fell down these cliffs and how they got the building material and food and everything down from the top of the mesa into their dwellings. They must have been able to climb like monkeys!

After a long day of 12 hours we find a room at the “Spanish Trails Inn & Suites” in Durango, CO. We are tired and have a quick dinner at KFC (Kentucky Fried Chicken). There were a lot of people at Mesa Verde and there are a lot of people in Durango since it is the only reasonable town in the area.